Hamilton, Ontario – Football Ontario has officially unveiled the High-Performance Pathway for the 2023 Team Ontario Women and Girls Flag Program. The program will be headed by GM’s Ashley Docking, Stephanie Thinn, and Jori Ritchie.

“We have been waiting for an organization and opportunity to put women’s flag football in the forefront, and that starts this year with Team Ontario. We have a group of committed, knowledgeable individuals who are here to see our athletes succeed. I couldn’t be happier to build this with Steph and Jori.” says Ashley Docking, Team Ontario GM.

“The opportunity to Co-GM with two amazing women again this year is an honour. The 2023 flag football season pathway has great opportunities for female athletes to showcase their talent. I’m excited to be returning to the program to build on our successes from 2022.” says Jori Ritchie, Team Ontario GM.

Phase One will begin with three Identification Camps which will include skill testing, drills and schemes, and identifying local talent.

The first camp will be held on February 4 at York University from 1pm – 3pm.

The second camp will be held on February 25 at Carleton University from 12pm-2pm.

The date and location of the third camp is still TBD.

The camps will cost $44.99 plus a 2023 Football Ontario High-Performance Membership.

Phase Two will consist of Virtual Playbook/High-Performance Sessions. All participants from the various ID Camps will be invited to attend these meetings and work through the playbook, chalk talk, and high-performance sessions. Players that are without regional teams will be asked to combine into teams in order to participate at the 5-a-Side Flag Provincial Championships.

Phase Three is the 5-a-Side Flag Provincial Championships powered by UA Flag. To attend provincials a club must be a registered member of Football Ontario. The Provincial Championships will be held in Georgetown, ON the weekend of June 3-4. Athletes will be able to play on their regional teams or on a team made by the Team Ontario coaches if they are unable to play for a regional team. 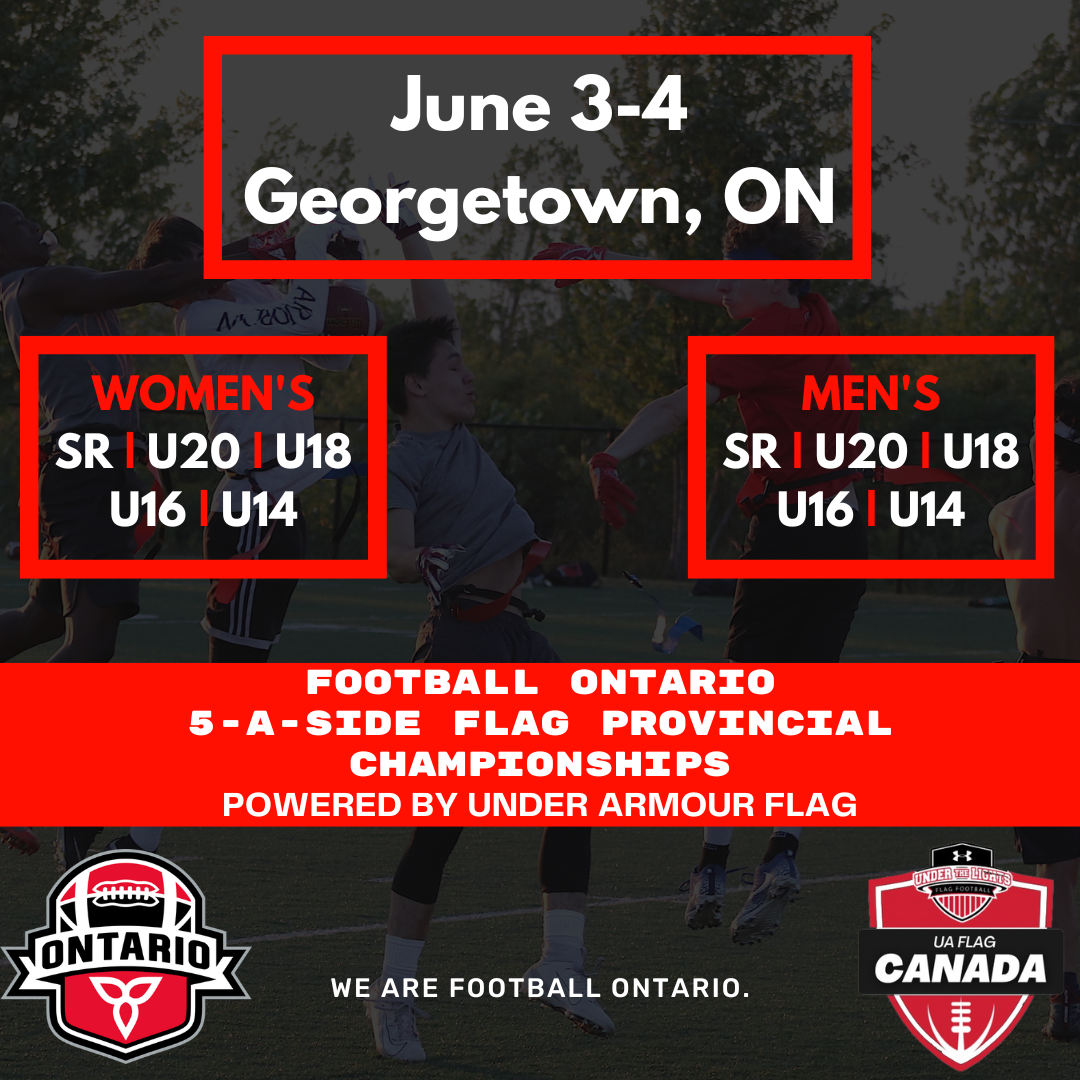 REGISTER A TEAM FOR FLAG PROVINCIALS

Phase Four will consist of a Development Camp in which athletes will be invited to attend and participate in both classroom and on-field sessions. From this Camp the final teams will be selected to attend Nationals. At the SR level there will be two teams attending Nationals, the winning team from Provincials as well as a Provincial All-Star team created by the Team Ontario coaching staff’s player evaluation .

Phase Five will consist of Training Camps to be held at each age level with the final Team Ontario rosters. This will include the final on-field practices and classroom sessions the athletes will have before they leave for Nationals.

The final phase, Phase Six will be the national flag tournaments that each Team Ontario team will participate in.

Football Canada will be releasing more information on the National Flag Event Schedule in the coming months.

“I am grateful for our Team Ontario Women’s Flag General Managers, who have collaborated to create the 2023 pathway. We are excited to provide more opportunities for women’s flag athletes, to support their football development and prepare them for the upcoming high-performance competitions.” says Emily Todd, Programs Manager with Football Ontario.

Football Ontario hopes to improve upon the successes from the 2022 Women and Girls Flag High-Performance year in which the organization saw Team Ontario capture two bronze medals on the national level.

Stay Tuned for More Information on the 3rd Identification Camp.