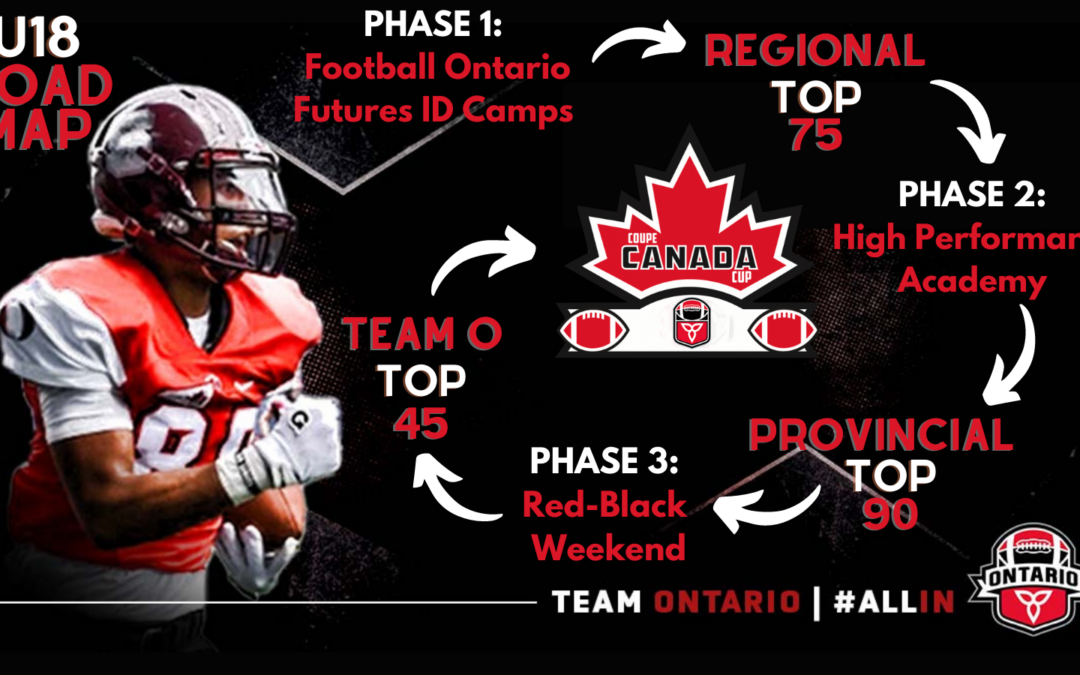 Phase One will take place in January and February with Football Ontario Futures and Identification Camps. There will be a total of four camps held across the province with an Eastern Camp, a Northern Camp, a Central Camp, and a Southwestern Camp. Players will have the opportunity to pay a one time fee to attend any or as many of the camps as they wish. The players may use these camps as a way to declare their intent on making the Team Ontario program, be identified, or simply further develop and hone their skills with the great coaching that will be available.

Phase Two will take place in March and April with the High-Performance Academy with the Top 75 Regional players (x3) being named. There will be development camps that take place across the province bringing in each of the respective Regional Top 75s.

Phase Three will take place in late-April with the selection of the Football Ontario Top 90 Provincial Players and the Red-Black Weekend. The Top 90 will be personally invited by Football Ontario to one of the largest recruiting events in Ontario with OUA/CJFL/U Sports coaches in attendance. Players will go through a mini-camp followed by the Red v. Black game that will be filmed and streamed.  The Red-Black weekend will coincide with the Football Ontario Mega Clinicin partnership with the OUA and will include a virtual draft held and performed by the Coaching Staff of the Team Ontario program leading up the the weekend. The draft will be streamed online via the Official Football Ontario YouTube Channel.

Following these three phases the Football Ontario Top 45 will be named and selected to take part in the Canada Cup (U18) and Eastern Regional Challenge (U16). For the full 2022  National Championship schedule CLICK HERE.

“I am so enthused as we formally begin the process for our 2022 High Performance program. Our Football Ontario leadership team has been diligently working to create a strong foundation and support system for our student-athletes and coaches. I look forward to unveiling some of the new initiatives we have been working on so we can continue to provide the best possible experience for our student-athletes, coaches, parents and the community at large” says JT Tsui,  the Director of Sport for Football Ontario.

Football Ontario is excited to have the opportunity to return to the National Championships in 2022 and lead a successful Team Ontario program in order to showcase all the talent the province has to offer.

If you want to declare your interest in being a part of the 2022 Team Ontario program fill out the interest form HERE.

Stay tuned for more information on dates, location, cost and registration in the following weeks.

ABOUT FOOTBALL ONTARIO: Football Ontario is the sanctioned provincial governing body for football in Ontario, through its focus on transparency, growth, alignment and excellence, is engaged in providing football opportunities for all of Ontario. Football Ontario is driven by a commitment to deliver football programming, opportunities and resources for its members and the provincial football stakeholders. Please visit: ontariofootball.ca