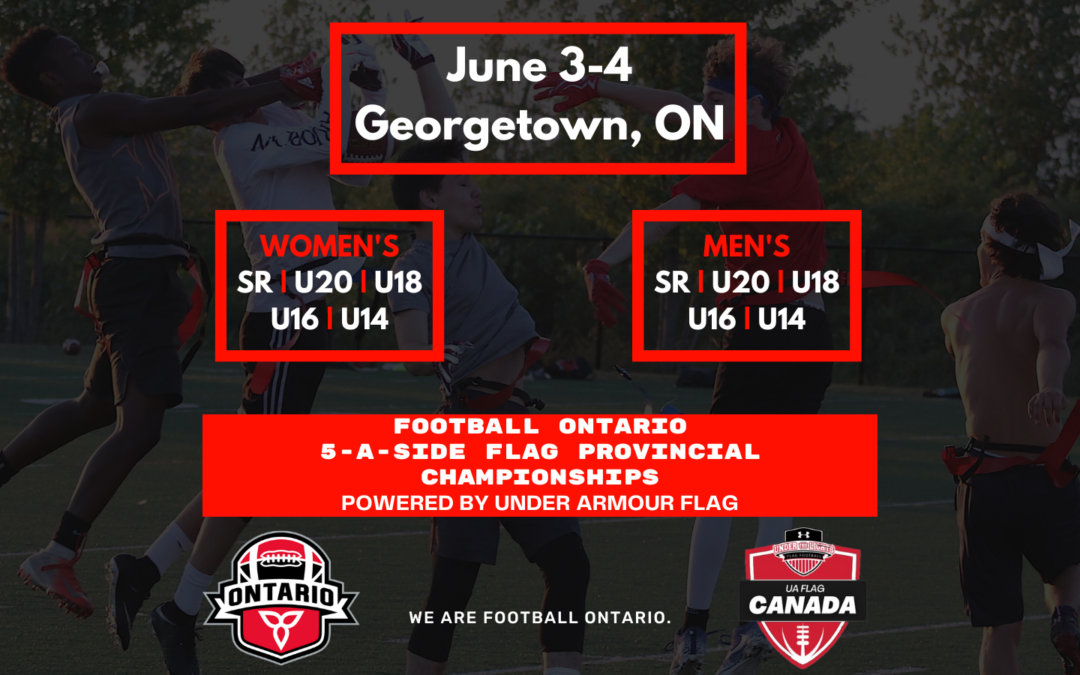 Hamilton, Ontario – Football Ontario is excited to announce the 2023 Football Ontario 5-a-side Flag Provincial Championships powered by Under Armour Flag will be held over the June 3-4 weekend.

TO REGISTER A TEAM FOR THE  PROVINCIAL CHAMPIONSHIP CLICK HERE

This event will be the largest flag event in Ontario and will play host to multiple age categories and both men’s and women’s divisions.

“We are thrilled to partner with Football Ontario to host the 2023 Football Ontario 5-a-side Flag Provincial Championship. As the fastest growing Flag Football organization in Ontario, we are committed to promoting and growing the sport across the province. We are excited to welcome players and fans from all over Ontario to our tournament and showcase the talent and passion for Flag Football in Ontario. This is sure to be an unforgettable event and we can’t wait to see who will come out on top as the Provincial Champion.” says Jonathan Nedeljkovic, Co-Founder and CEO of Under Armour Under the Lights Flag Canada.

Registration will cost $400 per team and all teams must be members of Football Ontario in order to participate. Team registration will be on a first-come first-served basis and will be limited to 8 teams per division.

There will be no refunds accepted after April 21/23. Any club seeking a refund prior to April 21/23 will be subject to a $100 administration fee.

The following groups will participate at the Provincial Championships in Georgetown:

Teams must  be made up of a minimum of 7 players and no more than 10 players on the roster. There will only be 2 coaches per team allowed on the sideline during a game.

TO REGISTER A TEAM FOR THE PROVINCIAL CHAMPIONSHIP CLICK HERE

All participants competing will have a chance to be selected to the final Team Ontario SR, U20, U18 and U16 teams that compete this summer for a National Championship. Stay tuned for the full Team Ontario pathways.

“Football Ontario is excited for our second annual 5-a-side provincial Flag championship. This event is the largest high performance flag football event in the province and provides a pathway for athletes to compete for their province in National flag events.” says Aaron Geisler, Executive Director of Football Ontario.

Flag Football is a quickly developing part of the football landscape in the province and Football Ontario is incredibly excited to showcase the top flag teams in the province over the course of one weekend.