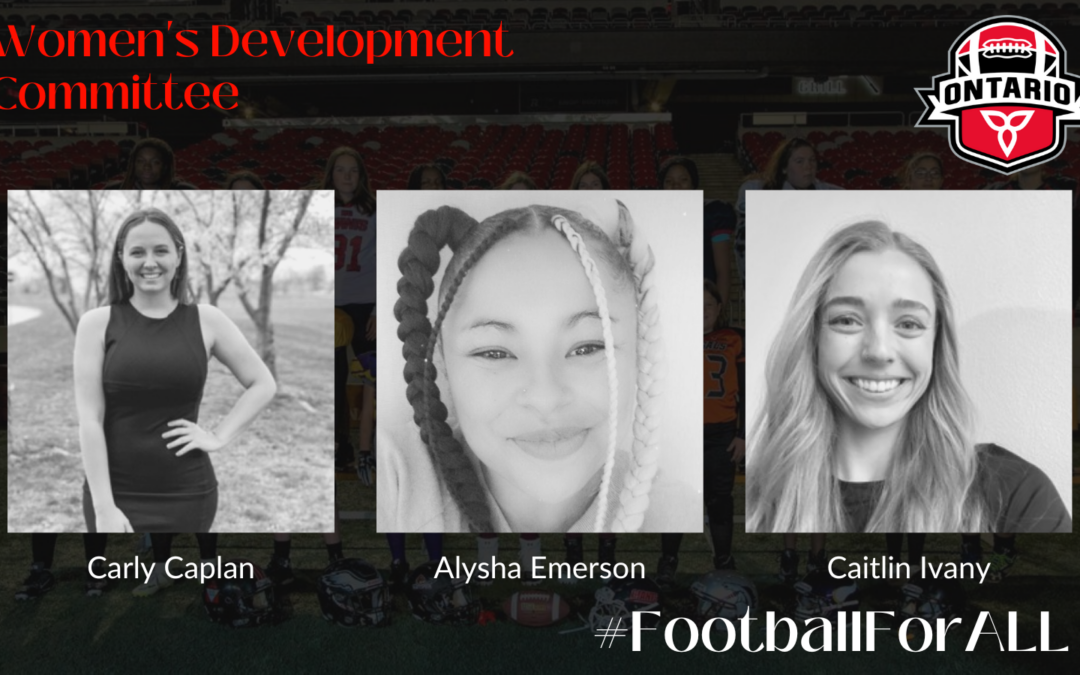 Hamilton, Ontario – Football Ontario has selected 3 individuals to create the Women’s Development Committee, (WDC). The group will work alongside Football Ontario’s membership, in order to create new opportunities for women and girl’s football in Ontario, and promote programs within the province.

The committee consists of 3 women who have extensive experience within the realm of women and girl’s football in Ontario, ranging from flag, touch and tackle programs, as well as coaching and officiating. The three women on the committee are: Carly Caplan (Southern Ontario), Alysha Emerson (Central Ontario) and Caitlin Ivany (Northern Ontario).

Carly Caplan will represent Southern Ontario. Carly spent the early years of life in the sports world whether it be playing, watching, or studying. She knew from a young age that she wanted to continue to keep sports close to her heart. Many years later from her early dreams of what her life could look like in the sports world, Carly graduated from Brock University with a bachelor’s degree after studying Sport Management. In her final year of school, she interned with the Canadian Football League in football operations. She then went on to work for Fox 40. Carly now works for Toronto Rock Lacrosse, a league in the National Lacrosse League where she focuses on customer service and finance. Carly continues to support and grow the sport world as best as she can, more importantly the women/girls sport world. As the organization make strides to provide comparative female opportunities in the sport world, Carly is happy to be a part of such a great team who can help make this happen.

Alysha Emerson will represent Central Ontario. Having been introduced to football 16 years ago, it has become an integral part of Alysha’s life. She has competed in many leagues including the Mississauga Womens Flag Football League (MWFFL), Touch Football Ontario (TFONT), Dawksports Football, Ontario Women’s Intercollegiate Football Association (OWIFA), and internationally in the Flag Football World Championship Tour. Alysha has been a player-coach in multiple leagues and coached in the Waterloo Women’s Football League. She is currently the Defensive Coordinator at Sheridan College for the Women’s Varsity Flag Football team. Alysha has also been a football official throughout the GTA, has helped to run clinics with Toronto Flag Football League in partnership with the Toronto Argonauts, and is currently the League Coordinator for OWIFA, the Women’s Division Liaison for TFONT and the President for MWFFL. With experience as a player, coach, coordinator, president and official, she has seen the game from all angles and recognizes that in order to grow the game, she can give back to the sport that has given her so much.  Having found her passion for football in adulthood, Alysha wants to ensure that the future generations of women and girls in football are aware of the opportunities available at every age group, but also ensure that more programs are available at the grassroots level to everyone wishing to explore football. The growth and support of women in sports is so important and Alysha is grateful to have been given the chance to ensure that the development of women in football in Ontario is given every opportunity for success, expansion and recognition.

Caitlin Ivany will represent Northern Ontario. Her love for football started as a player. She played touch football for 9 years, with a recent transition into playing flag football with OWF. Caitlin works closely with the Cumberland Panthers Football Club, with a focus on girls’ and women’s programs. She was a coach and the trainer for the Panthers U18 Women’s Tackle Team this year, who recently won the first ever Women’s Tackle OFFL Championship. She plans to continue working with the Panthers Women’s Tackle Team for the spring season. Caitlin is the program coordinator for the Panthers Girls’/Women’s Flag Program, where she is also the Head Coach and Trainer. Caitlin developed a Winter Training Program for Girls and Women in football, through the Cumberland Panthers Club. She will also be the registrar for all Panthers Girls’/Women’s Programs this spring. Caitlin is a committee member, responsible for organizing the 2023 Women’s National Tackle Championship. She is extremely excited to take on this new role with Football Ontario to continue to advocate for and develop women’s football.

Please connect with the Women’s Development Representative in your area: