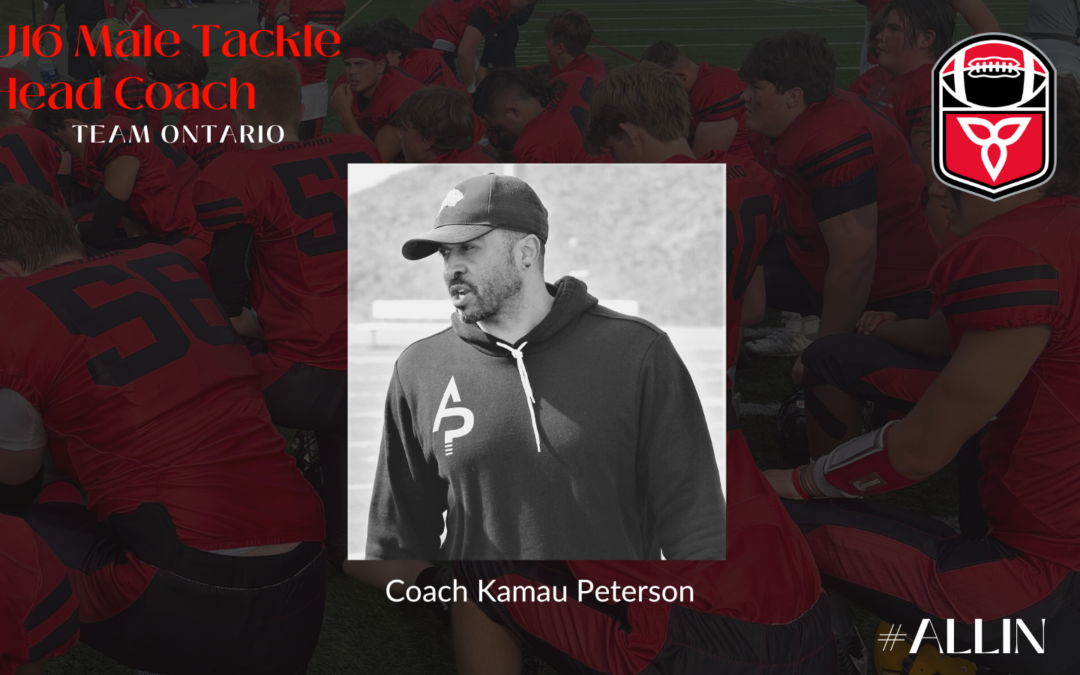 Hamilton, Ontario – Kamau Peterson has been named the new Head Coach for the Team Ontario male tackle football U16 program with Football Ontario. Kamau will serve a three-year term with the program.

Since the completion of his illustrious playing career in the CFL, Kamau Peterson has made it a point to constantly be in positions to give back to the game of football as a builder. Known nationally as a top speed and skill developer currently at Athletic Paradigm in Toronto, and previously with Playmaker U in Alberta, Coach Peterson has also done quite a bit of coaching since leaving the field as well, he was part of the Team Canada coaching staff from 2012-2016 winning 2 golds and 1 silver with Team Canada as receivers coach for the junior national team. At the U Sport level Coach Peterson was integral in the York Lions resurgence from 2014-2019 as the teams Offensive coordinator and Head Speed & Power coach.

When asked about his excitement in undertaking this role, Kamau said, “I’m very excited for the opportunity to work with Team Ontario, specifically the U16 age group. This is a great age to teach and develop and I look forward to building a quality team to meet the challenge of the summer.”

Coach Peterson will work closely with Football Ontario and the Football Ontario High-Performance Committee in order to create and implement a plan to help continue to grow and develop the Team Ontario U16 Male Tackle Team.

“I am so enthused that Coach Kamau Peterson will be helping to lead our U16 Team Ontario Men’s Tackle program for the next three years. Coach Peterson brings a wealth and diversity of experience both as a high-quality athlete and coach at every level of football he has been at. I know Coach Peterson’s energy, enthusiasm and passion to develop the whole person (spirit-mind-body) will enhance Football Ontario’ ability to create champions on and off-the-football field.” says JT Tsui, the Director of Sport for Football Ontario.

Kamau will play an integral part in identifying, developing, and preparing high-performance athletes and coaches alongside the High-Performance Committee in order to be best prepared for the U16 Eastern Regionals in the summer of 2023 with an official date and location to be determined.

Football Ontario  is excited to have Coach Peterson at the helm of the Team Ontario U16 Male Tackle  program and look forward to his success.

IF YOU ARE INTERESTED IN BEING A PART OF THE 2023 TEAM ONTARIO PROGRAM FILL OUT THE INTEREST FORM: CLICK HERE