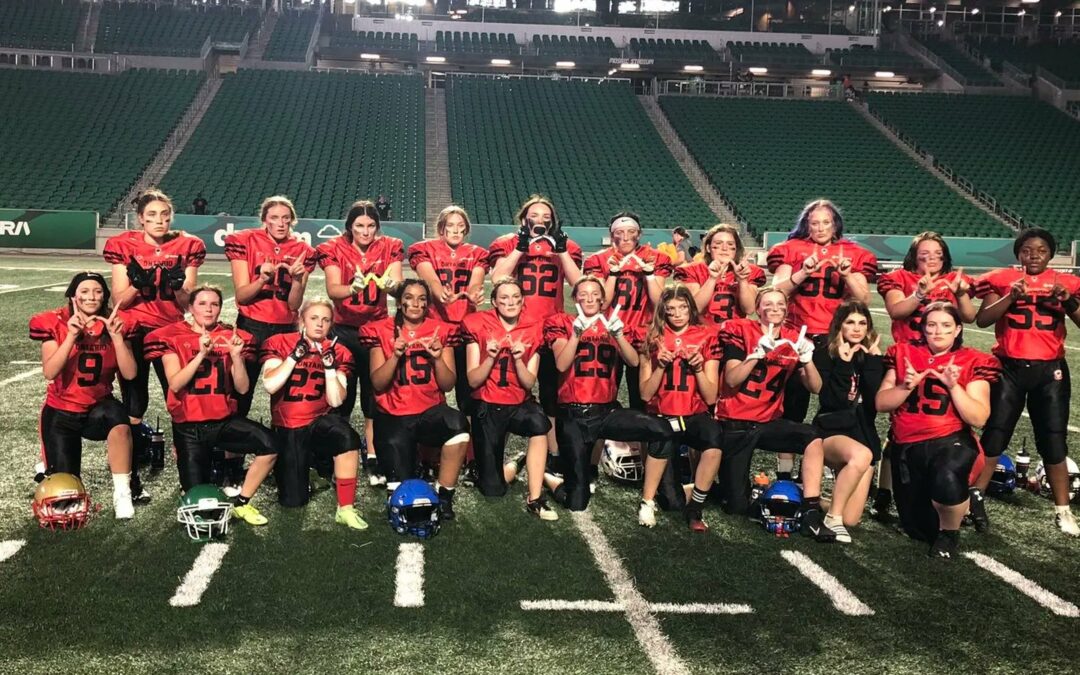 Hamilton, Ontario – Football Ontario has concluded all National Events for the 2022 Calendar Year. The organization is incredibly proud of all of its Team Ontario teams, athletes, coaches, and volunteers who all represented the organization to the best of their ability.

All Team Ontario Teams combined for 6 total medals in 10 different events, earning 4 Silver Medals and 2 Bronze Medals. The organization hopes to build upon the successes of this past year and become even more successful in the future.

Football Canada hosted the first ever U18 Women’s Tackle National Championship in Regina. Team Ontario participated in the round-robin schedule and finished with a record of 2-2 and earning them a shot at the Bronze Medal. They would fall to Team New Brunswick in the Bronze Medal in a close game. Yet, the team accomplished many firsts on their way to their fourth place finish and the organization could not be more proud of the team

U18 Male Tackle Team Finishes 4th at the Canada Cup

Team Ontario’s U18 male tackle team participated in the 2022 Canada Cup, the first Canada Cup since 2019. They came out strong winning their first game against Team Manitoba before falling to the eventual champions, Team Saskatchewan, in the Semi-Finals, although they did score the most points on Team Saskatchewan of any team in the tournament.

The team would go on to face Team Quebec in the Semi-Finals where they would again suffer defeat in their attempt at Bronze. Football Ontario is again very proud of the athletes and coaching staff who played a part in this event and looks to come back to the 2023 Canada Cup stronger than ever.

Team Ontario’s U16 male tackle team participated in the 2022 Football Canada Eastern Regional Challenge in Sackville, NB. They started off the tournament very strong with a huge win against eventual Bronze Medalist, Team Nova Scotia, which earned them a spot in the Gold Medal game against Team Quebec.

Team Ontario would fall to Team Quebec in the Gold Medal Game but they gave it their all until the final whistle. The organization is very proud of the many coaches and young athletes that competed.

The organization would also like to give a special thanks to Head Coach Joe Cappiello as his contract with Team Ontario comes to an end. Coach was a true leader and helped the athletes grow both on and off the field. The organization hopes to continue to build off of the success he has had with the U16 Program and wishes him all the best in his future.

Football Ontario sent 4 teams to CFFL Nationals, two SR Male teams and two SR Women’s teams. The event was hosted by the organization at Carleton University in Ottawa. Two of the four teams made it to the medal round with one of the organization’s SR Male teams falling just short in the Gold Medal game, earning the Silver Medal.

One of the SR Women’s Teams went undefeated in pool play and earned the #1 seed in playoffs but ultimately ended up losing in the Bronze Medal game, finishing 4th overall in the tournament.

The organization was able to claim four total medals at this event, capturing two silver and two bronze medals. All five of the teams were able to play in the medal round and earned top 4 finishes.

The U18 Boys finished pool play in 2nd place and won a thrilling Semi-Final game before eventually falling to Team Manitoba in the Gold Medal Game.

The U16 Boys claimed a huge victory in the Semi-Final before falling to an excellent Quebec Squad in the Gold Medal Game.

Team Ontario is proud of both Male teams for earning the Silver Medal and representing the province to the best of their ability.

The U20 Girls went into the Bronze Medal Game as underdogs as they had previously lost to Team Nova Scotia in Pool Play but they scored an amazing Game Winning Touchdown with under 2 minutes to play to claim Bronze.

The U18 Girls battled hard but ultimately fell short in the Bronze Medal Game, earning them fourth place in the tournament. They did not quit at any point in the tournament and should be commended for both their high level of play and effort.

The U16 Girls, similar to the U20 Girls, had a rematch against a Team Nova Scotia squad that they had previously lost to in Pool Play. They would also be able to pull out the victory earning them the Bronze Medal at Eastern Regionals.

Football Ontario is extremely proud of all of our High-Performance Teams for the 2022 Year. However, the organization will strive to improve and enhance the athletes abilities to perform at the highest level in 2023.