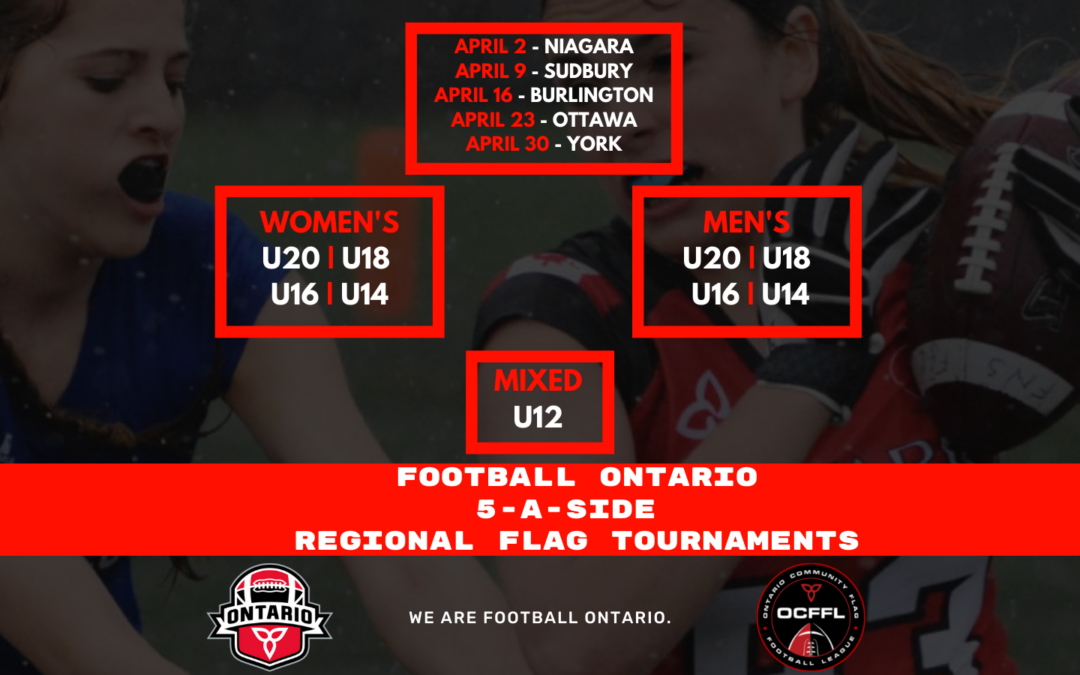 Hamilton, Ontario – Football Ontario is excited to announce the dates and locations of the 2022 Football Ontario 5-a-side Flag Regional Tournaments to be held over the Spring. A total of 5 tournaments will be held across the province to decide who will participate in the Provincial Championships at each age level.

The Five Regional Tournaments are:

REGISTER FOR A REGIONAL TOURNAMENT

The Provincial Championships will be the culmination of the five Regional Tournaments that Football Ontario has planned across the province with the best teams earning a spot. The winning team from each regional tournament will earn themselves a spot at Provincials over the May long weekend in London, ON and have an opportunity for each athlete to potentially earn a spot with the provincial flag team.

The following age  groups will participate at the Regional Tournaments:

The entry fee for the tournament is $400 per team for Football Ontario members and $500 per team for non-members. There are only 4 spots available at each age group per tournament so make sure to REGISTER NOW. Spots will be on a first come first served basis. All team registration is due by March 10th.

Each registered team will be guaranteed a total of three games at each age group. Two round-robin games and one playoff game

Each roster must consist of a minimum of 7 players with a maximum of 12 players total. For the U12 Mixed group there must be a minimum of two players of either gender.

“Flag football is growing rapidly across North America and we at Football Ontario want to make sure we are creating regional and provincial tournament pathways for our athletes to compete. With the push by the NFL and IFAF to get 5-a-side flag into the Olympics for 2028 we want to ensure athletes in Ontario have the best chance to be exposed to the game and hopefully be future olympic athletes” says Aaron Geisler,  Executive Director of Football Ontario.

Flag Football is a rapidly developing part of the football landscape in the province and Football Ontario is incredibly excited to showcase the top flag teams in the province over the next few months.

REGISTER NOW FOR A REGIONAL TOURNAMENT