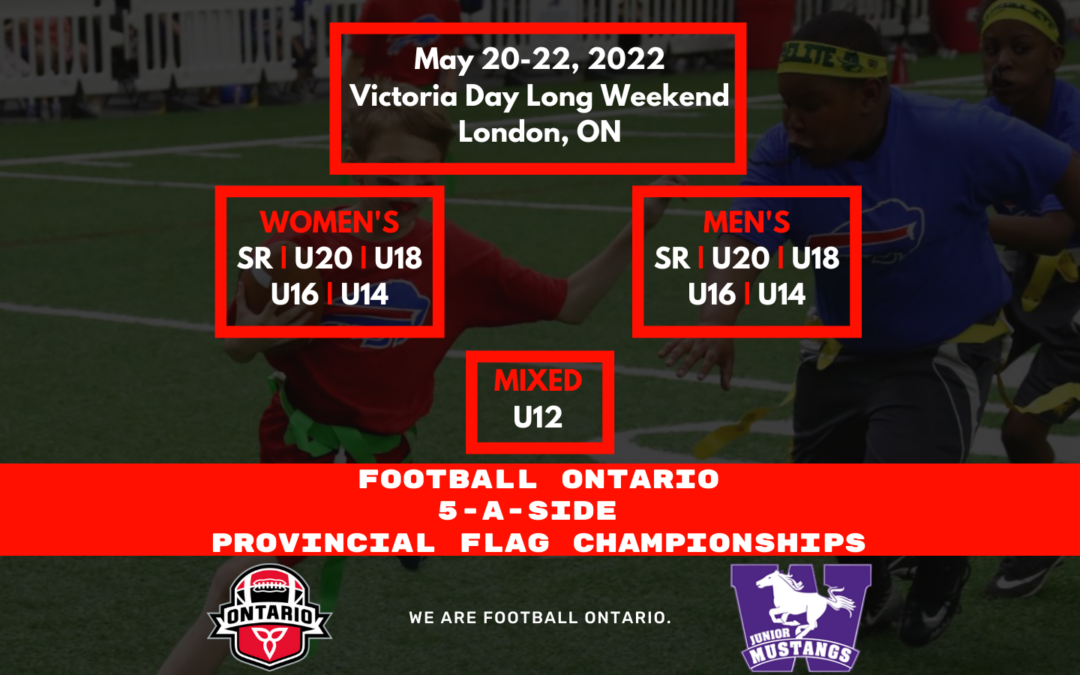 The Football Ontario 5-a-side Flag Provincial Championships will be held in London, ON and will be hosted by the London Junior Mustangs at City Wide Field. This event will be the largest flag event in Ontario and will play host to multiple age categories and both men’s and women’s divisions.

The Provincial Championships will be the culmination of the five Regional Tournaments that Football Ontario has planned across the province with the best teams earning a spot in London.

The following age  groups will participate at the Provincial Championships:

For Senior Men and Senior Women’s Flag there will be no regional tournaments. To be a part of the Provincial Flag Championship you must register in advance. The spots available for both Men’s and Women’s will be on a first come first served basis. All players will have an opportunity to earn a spot on the final Team Ontario Men’s and Women’s teams that will compete in Ottawa for the CFFL National Championships the weekend of August 5-7 this summer. Team Registration for Senior Men and Women’s is due by April 15th, 2022.

TO REGISTER FOR THE MEN’S OR WOMEN’S SENIOR PROVINCIAL CHAMPIONSHIP CLICK HERE.

For all other age groups (excluding Senior Men’s and Senior Women’s) to qualify for the Provincial Championship Weekend you must be one of the five winning teams from any of the Regional Tournament or be selected as the wildcard team. These 6 teams, along with the Team Ontario flag team, and a host flag team will participate in a round robin to decide who the best in the province is.

Each team in the tournament will play a minimum of 5 games over two days. All participants competing will have a chance to be selected to the final Team Ontario U20, U18 and U16 teams that compete in PEI this summer for a National Championship (August 9-14). At the U16 level the highest seeded non Team Ontario team will also earn a spot to the U16 regionals in PEI over the summer.

“This will be the inaugural 5-a-side provincial flag championship in Ontario and we are incredibly lucky to have the City of London and the JR Mustangs host this event. This is only the start of growing flag football at the provincial and high performance level to one day see Ontario athletes competing in Flag Football in the Olympics. This weekend will offer an incredible showcase of athletes from across the province and create a great family atmosphere for the May long weekend.” Aaron Geisler Executive Director Football Ontario.

Flag Football is a quickly developing part of the football landscape in the province and Football Ontario is incredibly excited to showcase the top flag teams in the province over the course of one weekend.