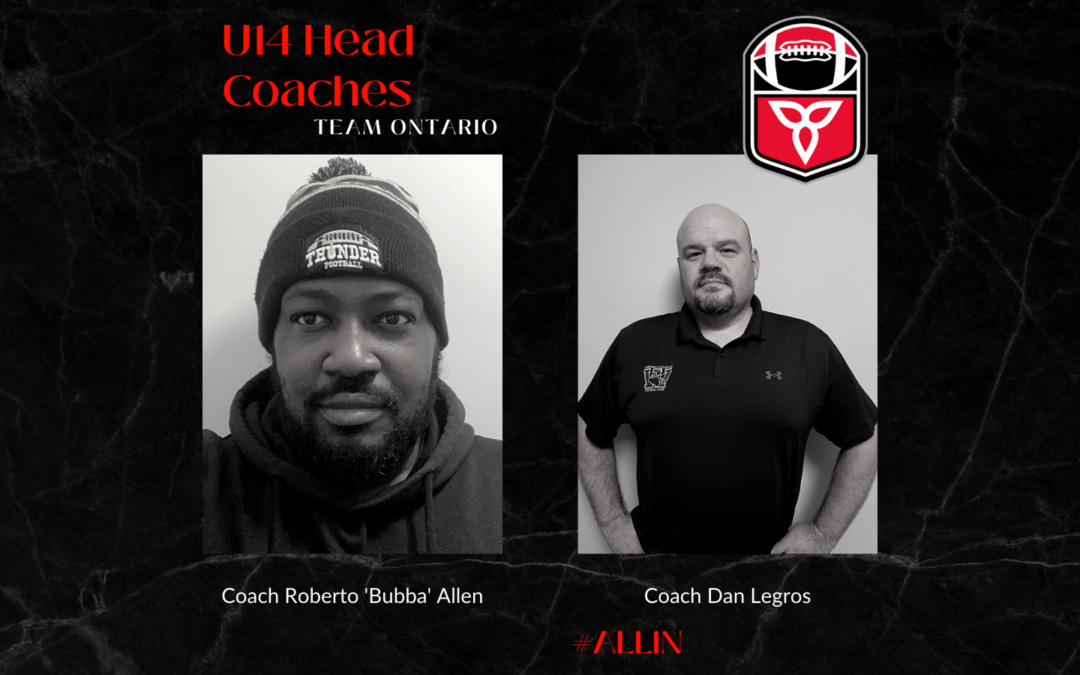 Hamilton, Ontario – Roberto “Bubba” Allen and Dan Legros have been named the new Head Coaches for the inaugural Team Ontario Men’s U14 Program with Football Ontario for 2022.

The two coaches will serve as the Team Red and Team Black coaches for the U14 Red v Black Weekend in May.

Roberto ‘Coach Bubba’ Allen is currently the President of the Scarborough Thunder Minor Football Association and the HC of their U12 Program. He has been involved with the program for over 20 years as a player, coach, and board member while winning various championships as both a player and a coach. Allen has also coached at the high school level and served with several CFL teams in a scouting role.

“I am honoured to be a part of Team Ontario’s High-Performance Program. My main goal as the U14 Head Coach is to help grow and develop the U14 Team Ontario High-Performance Program. There are so many talented U14 football players here in Ontario, and I am very excited to work with them and be a part of their development. I cannot wait to get started.” says Coach Allen when asked about his new role.

Dan Legros is currently on the coaching staff at E.S.C La Citadelle as well as serving as the Defensive Coordinator for the U12 Cornwall Wildcats who were the 2021 Fall Cup Champions. Dan has coached for various age groups within the Wildcats as well as with other high school programs. He has also coached various intro to football camps, elite skills camps, and speed and agility clinics in the past.

When asked about his excitement for the ability to lead the U14 Program, Dan said, “This is a great opportunity to develop our football community at the provincial level for the U14 age group. I am very excited to be able to instil football and leadership skills with the U14 Program. ”

Roberto and Dan will work closely with Football Ontario and the Director of Sport in order to create and implement a plan to help continue to grow and develop the Ontario U14 High-Performance Program.

“I am so enthused that Coach Allen and Coach Legros are now part of Football Ontario’s High-Performance Program. Coach Allen and Coach Legros bring a wealth of teaching, coaching and leadership experience, both on and off the football, which will help us as we grow our U14 Team Ontario program.” says JT Tsui, Director of Sport for Football Ontario

Both coaches will play an integral part in identifying, developing, and preparing high-performance athletes and coaches alongside the High-Performance Committee in order to  best identify and develop talent.

Football Ontario  is excited to have both of these outstanding coaches at the helm of the U14 Team Ontario Program and look forward to great success.