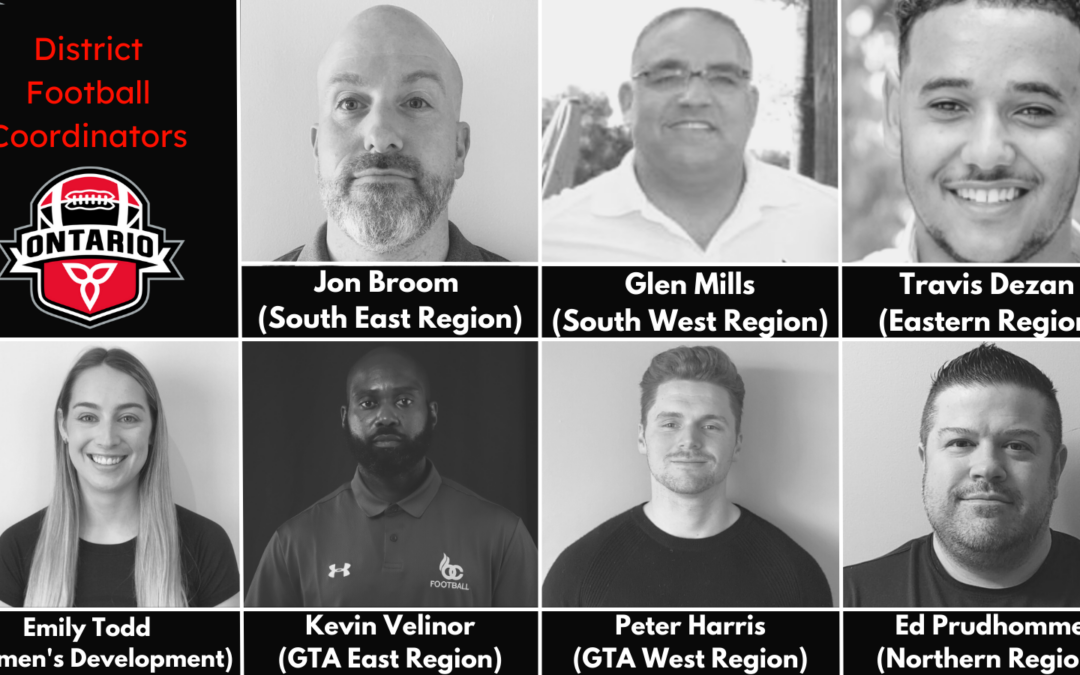 Hamilton, Ontario – Football Ontario is proud to announce that the organization has brought in seven new District Football Coordinators (DFC), all with a wealth of football knowledge to help assist the organization and grow the sport across the province.

Travis Dezan (Eastern Region) is a football coach with 10 years of experience in leadership roles. He is currently serving on the Queen’s coaching staff as the offensive/football operations assistant. He believes that football is the most inclusive and diverse sport which is why he is so passionate about it.

Glen Mills (South West Region) is currently the Head Coach/President of the Essex Ravens and has had great success with the program, leading them to 8 Championships. He also has previously coached with the Team Ontario program as well as coached at the University level for several years.

Ed Prudhomme (North Region) has coached at various levels of football in Sudbury over the past 20 years. The past 15 years he has spent as a major contributor to the Joe MacDonald  Youth Football League in a variety of roles, including league president. His goal is to increase the quality of training and coaching in Northern Ontario while also promoting safety, diversity, and inclusion.

Kevin Velinor (GTA East Region) has been coaching for the past 20 years at different levels.  He started playing, and currently coaches in the Scarborough Minor Football Association with the Scarborough Thunder in roles such as Defensive Coordinator and Head Coach. Kevin has also coached at the high school level for the last 15 years and is currently the Varsity Head Coach at Bill Crothers Secondary School.

Peter Harris (GTA West Region) has a long history both playing the game of football as well as on the business side of the sport. A graduate of the University of Toronto, Peter played five seasons with the Varsity Blues as a DB and was named a co-captain his senior season. After graduation Peter continued to play competitive football in the Alberta Football League where he saw success as a player and coach. Peter then became involved on the business side of sport in supporting the league and his team from an executive position. Adding to this practical experience, he has a graduate certificate in Sports Management from NYU’s Tisch Institute for Global Sport.

Emily Todd (Women’s Development) will be responsible for helping to continue the growth and development of women’s football across the province. She will accomplish this by seeking out pathways and helping promote women’s football. She started to develop a passion for football by volunteering at the Burlington Stampeders concessions stand, and attending games throughout high school. She played quarterback in intramural flag football at Western University, and volunteered with the Equipment Manager for the Western Mustangs football team for 3 years, winning a Vanier Cup in 2017. Recently, she worked with the  Holy Trinity Catholic High School football team  as their Social Media Coordinator, creating a team website and Instagram account to promote games and showcase players

The main objectives of these District Football Coordinators will be to provide general support to regional member associations, and the Regional Association committee in the attempt to increase the profile of Canadian amateur football programming in the province of Ontario.

“I am so enthused to work alongside our new District Football Coordinators. They are all committed to being part of the change and helping us to achieve our mission of providing football for all. Our District Football Coordinators bring a wealth of football knowledge, coaching/teaching expertise and lived leadership experience that will help us to create more diverse, inclusive and equitable opportunities within our beautiful game” says JT Tsui, Director of Sport for Football Ontario.

The District Football Coordinators will strive to create membership and participation growth in their respective regions to create more inclusive entry points for new participants.

Football Ontario is excited to bring these individuals into the fold to help mold and shape the future of the football landscape within Ontario thanks to their shared visions and goals for the organization and a strong desire to help continue to develop the sport and increase inclusive opportunities  province-wide.